this is something out of my „world of numbers“, that I would like to share with you.
I have been working on the new edition of the Abraxas-Calender since the Calendar was first published in 2010.
In the Abraxas-Calender you find a Liber AL-Vers for each day of the year.
In the new edition you also find for each day of the year a degree of the zodiak.
May be you know, that the 12 Signs of the zodiak are not all ruling for 30 days in the year. Some of them (Saggittarius and Pisces) are only ruling for 29 days, and some of them are ruling for 31 days, for example leo and virgo.
So, sometimes two days have to share one degree. And sometimes two degree have to share one day. When which days share which degree or the other way round, changes over the years. To know the exact dates, you have to look in the ephemeris. (for example at „http://www.astro.com/swisseph/swepha_g.htm“)
Because the Abraxas-Calendar is an everlasting calendar,
(that means, a calendar that not changes every year,) I had to decide, which days should belong to which degrees in the Abraxas-Calendar..
With Libra, Scorpio, Capricorn and Aquarius this was no problem, because each of these signs rule exactly for 30 days.
But following an impuls, or, lets call it a „playful intuition“, I decidet that in Aquarius two days have to share one degree AND also two degrees have to share one day. This was not necessary, because Aquarius rules for 30 days.
When I was done I counted all the numbers that make all irregularities in this system, where the 365 days of the year are associated with the 360 degrees of the Zodiac.
I discovered, that I had used 33 numbers, which add up to 3333.
This is such an amazing „coincident“ that I want to share this here.
The 3333 is in complete harmony with the zodiac, because 3+3+3+3= 12 and we have 12 signs in the zodiac. We have 3 firesigns, 3 watersigns, 3 airsigns and 3 earthsigns.
The number 3333 adds up from 273 (the degree-numbers) and 3060 (the numbers of the days of the year.)
In the world of number-correspondencies the 273 is known as the number of the days of a pregnancy. Also it is the number of the degrees we count from the spring-equinox until Christmas Eve. We could say, that the earth goes pregnant with the sun which is born on Christmas.
In the hebrew Kabbalah 273 is the number of the word „Arba“, spelled out Aleph-Resh-Beth-Ain. „Arba“ means „four“. The shown pattern of the 3333 repeats four times if we start to count the year at the first of march. The pattern is „brocken“ after four years on the 29th of February in each leap-year. In the number 3060 (all irregular days of the year) we find the digits of 360, the number of all degrees, and we can built a bridge to the 29th of February: It is the 60th day of the year, wich normally is the beginning of the 3rd month of the year.
To make the discovered „coincident“ clear to my self, I have made a drawing, which I want to share here. May the sun shine inside of you all. 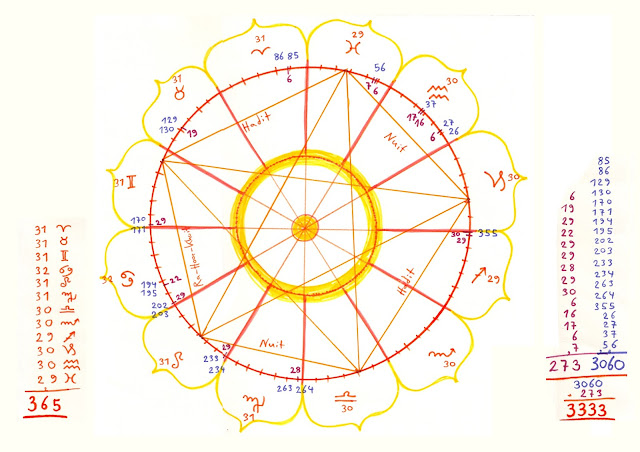